Since an early age, I was always passionate about art. My main interest for many years was for architecture. I was always interested in creating different structures from drawing my own designs, to recreating the landscapes of places I visited; I found it a way to express what I felt without words. My interest and passion for art were nurtured by friends, colleagues, and professors by exposing me to different places and events, such as exhibitions and screenings. It was during high school when I had an introductory class about History of Architecture on ancient civilizations where I learned how architecture helped historians to understand the culture of these places.  My aim for many years consisted to study architecture in Colombia and work in an environment, where I can come up with an idea, create a physical representation and bring it to life. During high school that idea changed, a group of older students formed a film club, which took place every Wednesday after classes. I was interested to know this group and watch movies that were unfamiliar to me. Their main focus was on showing non-commercial or art-house films from the United States. My exposure to film started growing as I kept discovering different styles of film, where I was encouraged to think about what I was watching. I knew that I could not fulfill this growing passion in the way I wanted to in Colombia.

Soon after graduation, at 18 years old, I traveled to Germany where I wanted to begin my studies in film. Unfortunately, I was too young and inexperienced to apply to the universities I wanted. At 19, I moved to Argentina and started film studies, there I soon learned how big the world of cinema really is.  In Argentina, my studies were based on the impact of film in culture and the way filmmaking documents each time period and lets us continue exploring and communicating emotions.  Studying in Buenos Aires, I realized the fact that by not being able to study in Germany brought better outcomes than what I originally thought, and although my period in Argentina was short, the exposure I got to international films, specifically European and Japanese films was great.

My passion grew, even more, when I moved to Toronto. My first impression of Canada was a very open country in a constant state of discovery, it became something that I saw reflected in its cinema. It was very difficult for me to point out a Canadian film, because I had always looked for a unique approach or subject matter, but what I found unique about Canadian film, was the amount of different stories and cultures Canada has and how each one has a different way to see the world they live in.  My passion and interest, not just for international films, but also Canadian films grew as I constantly watch films at the Tiff Bell Lightbox. 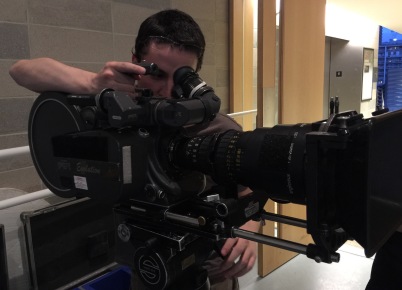 Tiff Bell Lightbox has now become something like a film school to me, where every week they screened unique stories with an innovative technique. But what I appreciate the most is the efforts being taken in regards to film preservation and conservation.

Recently, I was selected to be part of a young group of film enthusiasts contributing to the promotion and engagement of younger generations into the Locarno film festival vision on auteur cinema. I’m very excited to contribute to this effort because it will allow me to know the tools and medias that are required to support the promotion and marketing elements of film making. But I don’t think I should stop there because every culture and country has a different relationship towards its cinema, and what I want is to keep expanding my understanding of these different cultures and how cinema reflects those differences.

During my first Made In Canada – MIC ’17 Intern orientation meeting with my mentors Orla and Marva I learned the importance of finding the audience for each film and creating strategies to reach out to them and to learn what the filmmaker has to do to understand the unique nature of each audience. This is something that I will keep at the forefront as I go about my tasks at the Locarno Festival, which will also be a focus of my first field exercise for the Made In Canada Internship.

Being involved in Cinema is proving to be the most valuable aspect of my life. It is helping me to identify and discover my place in film. Not only am I getting to know multiple ideas, people, and cultures that surround film, but most important for me are the endless ways of expression that film allows a person to communicate a feeling, a thought, a passion. Being part of 2017 Made in Canada internship program will provide me with a different point of view on the Canadian industry and expand my understanding on the struggles and task Canadian filmmakers confront when they need to express their thoughts and emotions.