Before you begin reading this post you should know that this is not a typical Made In Canada segment. I received a request to find a female’s perspective on the Canadian market while being at Cannes, and to be honest I could not find someone to fill that request. This made me think about the film industry being saturated with male filmmakers and how woman do not have enough of the spotlight. Women should have a more significant role in this industry, so I wanted to make a post about a female filmmaker sharing her opinion about the Canadian filmmaking industry. 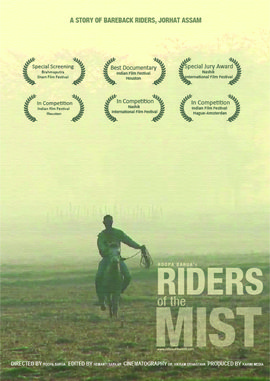 Roopa Barua is a producer from India who I have had the pleasure of staying with during the duration of my stay here at the Cannes Film Festival. She is here for her documentary feature film Riders of the Mist. During the filming of this project, aside from herself and the editor, Barua chose a crew of all men. Filming in the wild for long hours required man-power, but when it came to post-production she chose a female editor. Here is her response and reasoning to why she chose the crew she did (video below).

She also talks about India’s association with Canada, Canada being the #1 co-production country, and the hopes for her future work to cross paths with Canada.

Personally, as a young female filmmaker, choosing a profession that is saturated with male authorities, I wonder if I chose the right profession to thrive in. Would my best work be enough as a young female in the filmmaking world? I know there are woman who have made a significant difference and who have found success but these women are very few. In Canada I see talent from all gender and race. The reality, will I be heard in this male dominated market?

When I speak with woman like Roopa Barua it gives me hope that woman are be recognized and taken seriously about their passions and projects. There is more to the film industry than the perspective through the male eye. I hope I can provide another perspective, whether that be through the eye of a woman or through the eye of a daughter, cousin, protector….. Woman should have a more significant role in this industry. Filmmakers like Roopa Barua are good examples of the female filmmakers making a difference.