August 1st – TIFF 2018 Canadian Press Conference at The Royal York Hotel –  My first MIC’18 Assignment. Armed with my camera, and new knowledge of why it was important for Canadians to engage with Canadian films, my overall excitement for the first event of my internship turned to anxiety at the door.

Once I finally made it inside, I was nervous but generally aware of what to do and where to look despite being a beginner, but at my side was my peer mentor Cherise Solomon,  herself a past MIC’16 Intern, “you are here to get the perfect shot of the filmmakers on the red carpet and they are here because TIFF may be the only opportunity they get to promote their film,”  Despite all her kind encouragement and advice, I wasn’t doing much unless I was in the media box, so, with a deep breath, I threw my anxiety away, tripped over the velvet rope and inserted myself as a press photographer. 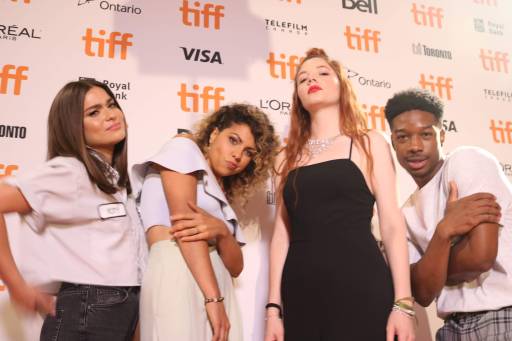 Most of the actors and filmmakers were kind enough to stop and let me get their photo. Some even allowed me to take funny shots of them like the TIFF 2018 Rising Stars: Devery Jacobs, Lamar Johnson, Michaela Kurimsky, Jess Salgueiro and the directors of  Freaks Zach Lipovsky and Adam Stein, which seems like an amazing film to watch alongside The Grizzlies by dir. Miranda de Pencier, Firecracker by Jasmin Mozaffari, and What is Democracy? By Astra Taylor.

However, it seemed to me that there was a lot more happening other than introducing the 54 Canadian films screening at TIFF this year – There was what I believe to be a significant  announcement: Piers Handling was stepping down from his leadership role at TIFF and handing the reins over to Cameron Bailey, the photo of them back when they were programmers over 30 years ago gave everyone a good laugh, and I managed to capture Steve Gravestock, Programmer for TIFF Canadian Selections, and his Mom, having a sweet moment.

As the conference wound down, I was fortunate enough to chat with an agent from the Ontario Media Development (OMDC) For Film & TV, who was surprisingly very excited to see Cherise and I, because she firmly believes in bringing media interns into big events like TIFF to allow them the opportunity to explore and grow their network which made me very happy, considering this would give me and my fellow creatives a starting chance in our industry maybe at TIFF. With this and our final goodbyes, I left my first day at TIFF with hundreds of photos, and a genuine excitement for my MIC Internship and for the festival to begin.