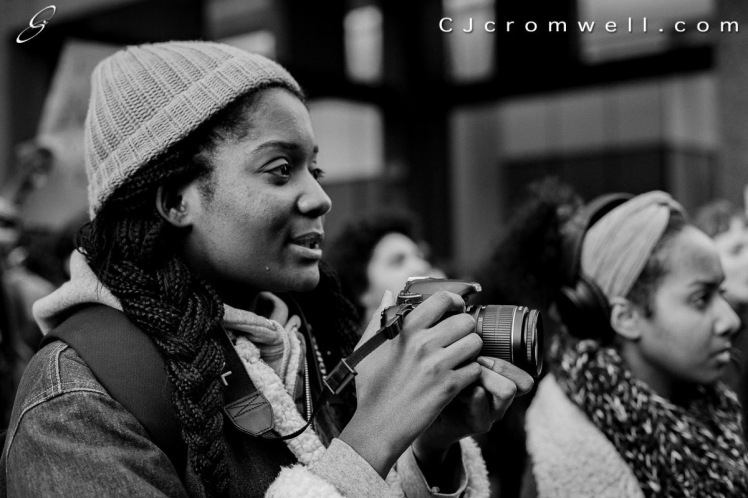 I’ll be the first to admit that despite being a student of storytelling and an aspiring filmmaker myself, I know very little about Canada’s filmmaking industry. My gateway into storytelling came unexpectedly from my experience as a human rights advocate. After completing a United Nations fellowship for people of african descent in Geneva Switzerland, I realized the connections that existed between story and fighting for human dignity. I was interested particularly in stories of people who looked like me, brown skinned,  and found little to no examples in Canadian media that showed this. There were also no women of colour in the “I am Canadian” beer commercials, as if there were no women of colour who also enjoyed a good hockey game. To be fair, I’m not the biggest hockey fan, nor the biggest beer drinker — but I knew several women of colour who were. But I digress, in my search to become a better storyteller, I taught myself how to use my DSLR and stumbled into journalism and filmmaking. I believed that, the only way to see the stories I felt were important to be seen and heard, was for me to help tell them.

In my pursuit of both journalism and filmmaking I’ve struggled at times to reconcile the need for objectivity that journalism asks for in stories, with my inherent need to dig for humanity and vulnerabilities in the stories I’d read. I realized I needed both. So while my Master’s of Journalism was coming to an end, I started to actively seek out both journalism and filmmaking opportunities. It was while participating at this year’s Black Women Film, that I met Marva Olliviere. She was one of several mentors that were a part of the program that mentored aspiring young black women filmmakers like myself. She spoke to me about the internship offer with Made In Canada. Shortly after the program ended, I was offered the opportunity. I was as excited about it as I was nervous.

What peaked my curiosity about being a MIC intern was its goal — to cover what it’s like for Canadian filmmakers to premiere their films at Canada’s biggest film festival. The other enticing factor was the focus on not only the stories being told by these Canadian filmmakers but also their personal journeys to TIFF 2016.  My worry in accepting this opportunity was in the fact that it’s unpaid.

I’m still carrying the weight of student loans from both my undergrad and now masters degree, while being perpetually either unemployed or under-employed. So accepting yet another unpaid internship is far from ideal. But when the universe serves you an opportunity to marry both journalism and film and practice your unshaken belief in the possibility of story — you say yes. So I did.

So on my first day, when I walked into the lobby of the Fairmont Royal York hotel knowing that this was my first official day on TIFF 2016 duty, I was nervous. The task was to cover the event, network, absorb and learn. Here I was with the nervous mothering gaze of the MIC crew while Cherise, the other MIC intern and I stood in the media pit with DSLR cameras and phones at hand, ready for our first red carpet.

In a sea of majority white men with fancy cameras, we stuck out like sore thumbs being one of the few black women  and by sporting our  large afros. My discomfort of this reality slowly faded as the red carpet got underway, but never really disappeared. I took a few test shots, and hoped for the best, and tried to not get too intimidated with the fancy cameras the photojournalists beside me were sporting. “Just keep shooting and try to get the shot”, I thought. I tried to summon the wise words of my former award-winning photojournalism professor Peter Bregg, “it’s not what you see, it’s how you see it”.

I quietly started taking photos, hoping I’m not blocking any of the OG photojournalists who surely were curious about who we were. What I did not expect, maybe naively so, was the yelling. All of the seasoned photojournalists unashamedly yelled at the stars of the red carpet, to look at their cameras and to pose for them the way they wanted them to. They loudly and unapologetically directed the stars in order to get the shot they needed. With the advice of one of the photographers who noticed our silence, I very quickly started to get louder. This time, I noticed my voice as a woman in a sea of yelling men, turned the heads of the stars on the carpet. YAAASSSSS! Eyes here please! Thank you! One more! Thank you.

I got the shots I needed!

Cherise and I managed to grab a few snacks, before the official press conference starts. We are given a brightly coloured folder with the large words “TIFF16” written on it. I feel special because it feels like it’s exclusive to only members of the press, and in this moment that includes me. Announcements of this year’s Rising Stars and Talent Lab and Telefilm Pitch are announced with loud applause, and I realize who the people I yelled at to get a picture really were. I realize that despite not knowing much, I recognize the work of a few of these Canadian filmmakers that are showing their work at Tiff this year. Including Philippe Falardeau who was behind (one of my favourite Canadian films in a while)  Monsieur Lazhar, who will premier The Bleeder. The Francophone in me is excited when I hear speakers that hint of a Quebecois accent. While the announcements continue, I notice the increasing number of female directors. I smile in satisfaction and get curious.

The press conference ends, and my mild social-anxiety turns into excitement. I survived my first TIFF press conference. I leave wanting to know more about what’s coming up, excited that unlike my previous years living in Toronto, I will be at TIFF watching, documenting and being there reporting back to readers the films and stories that are being Made In Canada.